The signs our bodies give us when we lack vitamin D and how to fix it.

Staying healthy isn’t the easiest thing to do. You live a busy life that requires your attention almost every day with little time to reflect on your own health. Often times you learn too late that you have been neglecting your health by ignoring simple signs your body provides to show that it was heading into a state of decline. One of the deficiencies that many people ignore is their required daily intake of Vitamin D.

Vitamin D is vital to your health and happiness, however, it’s one of the most common deficiencies that you can obtain over time and by not getting enough, it will cause many issues down the road.

A lack of this sunshine vitamin has shown to increase levels of depression. While the process is not fully understood, scientists theorize that the receptors in your brain that were made specifically for vitamin D help produce serotonin when the vitamin binds to these receptors.

This would mean that your body would be able to regulate how much serotonin is made more efficiently which, in turn, would reduce the rate and severity of depressive episodes.

Bottom line, if you experience the case of the blues more often than not, it may be time to reevaluate your vitamin D intake.

Everyone will get sick at some point or another as they go through life. However, if you’re feeling sick more frequently than when the common bug gets passed around the office, then it may be time to look at the root cause. Vitamin D has a very strong connection with your immune system, working with white blood cells to fight off infections that threaten your body’s functions.

Studies show that patients who take high doses of vitamin D for one year see drastic improvements to their health and a lowered rate of sickness caused by the common bug.

Those who have chronic low vitamin D levels have been shown to run a higher risk of obtaining severe diseases. Cases that had a severe lack of vitamin D have been linked with dementia in the elderly, prostate cancer, schizophrenia, and heart disease, among others. Individuals who retained a normal level of vitamin D had their risk percentage cut almost by half.

It’s important to understand the difference between being tired and being fatigued. Being tired or sleepy can be recognized by simply being able to find a comfortable place to relax and drifting off to sleep seamlessly, and it’s usually associated with not getting enough sleep in the first place. Fatigue is a complete lack of energy.

Some may compare it to feeling similar to having just run a marathon but the feeling lasts all day. When you’re fatigued, you have a hard time completing tasks and usually can’t fall asleep if presented with the opportunity to take a nap.

People with fatigue usually have underlying health problems that are causing their complete lack of energy. Those who suffer from chronic fatigue are found to have low vitamin D in the blood. Upon receiving a supplement, patients show improvements in their energy levels within a week after starting them.

Aches and pains are common as we grow older with time. The body is not immune to the aging process. However when you start noticing pains in specific parts of your body, then it may be time to take a more critical look at may be causing it.

Vitamin D is linked with bone health. Its presence allows your bones to absorb calcium more readily, which as many are aware, contributes to how strong your bones become.

People who have complained of lower back pain or pain in their bones are linked to having dangerously low levels of vitamin D in their systems. This, of course, leads us to our last sign…

It may not be difficult to understand how this is related given the information in the last segment. Vitamin D is essential for bone and muscle health, allowing calcium to be drawn from your gut to build a stronger bone structure which will prevent falls and fractures later on.

It may not come as a surprise that those who suffer from a vitamin D deficiency may also have a higher risk of suffering from Osteoporosis, which has become very common in the elderly, and especially women.

Most would just assume that taking supplements with more calcium is the cure for this ailment but while calcium may be lacking, vitamin D is more than likely lacking as well, and taking both will aid significantly in strengthening your bone density.

Finding The Right Vitamin D Supplement For You

While vitamin D is extremely important to your body’s health, a deficiency is easy to correct. An average adult needs at least 600 UI of vitamin D to retain normal levels in the body. Most of your basic multivitamins will have, at a minimum, this amount. Otherwise, in can be as easy as going outside and getting a little sunshine with the proper sun protection or eating foods such as fish, eggs, and mushrooms. Fortified drinks like some kinds of milk will also have a good amount of vitamin D available. Be careful, however, as sun exposure can come with many risks including sun burns, heat stroke, and cancer!

Vitamin D supplements are a great way to treat and prevent vitamin D deficiencies. They’re safe, effective, easy to use, and convenient (especially the tinctures in dropper bottles). These typically come in the form of vitamin D3 which is a form of vitamin D that is readily absorbed by the body. They are often paired with vitamin K2 which boosts the body’s ability to absorb the vitamin D3.

There’s plenty of brands on the market to choose from but quality does matter when choosing a vitamin D supplement. We recommend doing some research on the different supplements that are available. Product review sites, such as Natural Review’s Top 5 Vitamin D Supplements in 2022, are a great place to start.

It’s important to recognize the signs your body will display when what you’re doing just isn’t enough to keep it healthy. Acting on these signs and correcting the problem in the present will preserve your health down the road, whereas continuing to ignore the problem will only cause more issues, some permanent, that could’ve been easily prevented with a simple supplement.

You might also want to consider taking probiotics, as an unhealthy gut can cause many of the same issues as low levels of vitamin D. 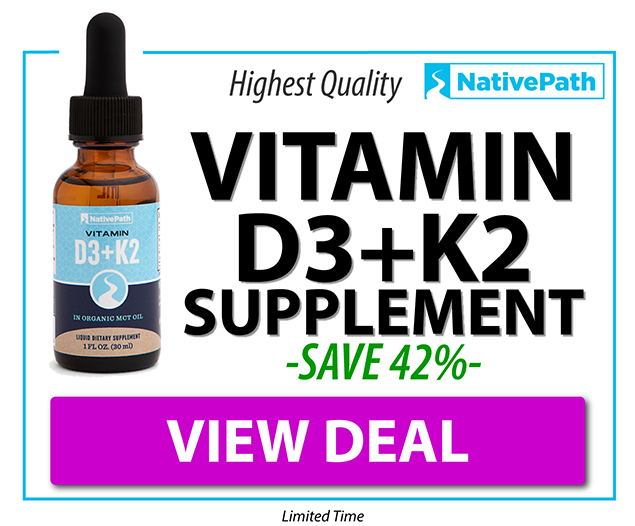